Ever hated hauling around your electric tooth brush while travelling worrying about how to store it keeping it clean and it being quite heavy. Well that’s where the awesome peeps at VIOlife came up with a solution for us this brush is pretty awesome it comes in 19 trendy designs is light weight and super compact at first glance you wouldn’t even think it was a tooth brush it kind of reminds me of a tube of mascara really. The cap clicks shut tightly so you know it is properly sealed and the cap won’t come off randomly in your bag which also happens to nicely cover the button so you won’t have to worry about it turning on. The 3 ventilation holes at the top keep the brush hygienic and clean as we wouldn’t want any fungi or germs forming. It operates at a powerful 22000 strokes per minute so don’t underestimate the power of this little gadget. It operates on a AAA battery which I recommend you take out if you plan on not using it for an extended amount of time. The battery and additional brush head are included in the pack. To summarise this can be categorised as a hybrid between a normal tooth brush and an electric tooth brush. 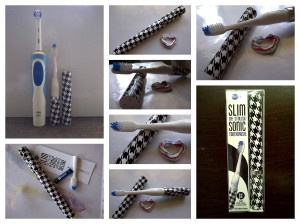 You can purchase yours at slimsonic.co.za for R299

As seen in press publications